A proxy is something this sits between a client and a server and does something with the data flowing through it. So a DNS proxy does this for DNS packets.

Funkensturm consists out of 3 configuration parts: 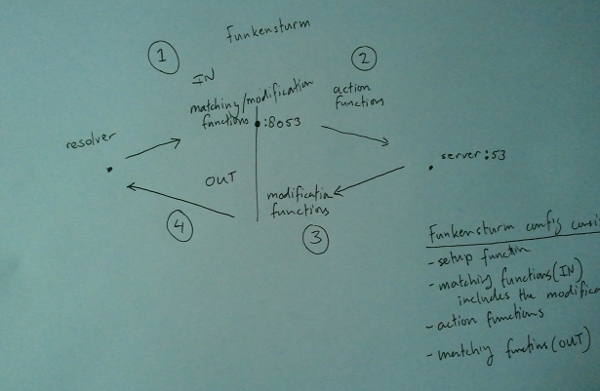 The image above shows the architecture and the stages of Funkensturm. The number shows the stage were you can influence the packet.

The match/modify functions are chained (ala Unix pipes), the input packet to the function[N+1] is the output packet from function[N]. They are also chained in the logical sense of the word:

outcome is given to the action function(s), so they can decide what to do to packets that match the criteria and those that don’t.

The match/modify functions are re-used on the way back, so you have a last change to change the packet before it is send to the client. If this stage is reached a packet is always send back, unless it is nil.

I contemplated a “simple” configuration syntax, which would then be translated to Go code. But making a flexible and simple syntax is hard and there will always be stuff you can not express using this syntax. In the end this will lead to a complex language which still won’t fulfill all your needs.

Therefor I opted to configure Funkensturm directly with Go. I.e. you have to recompile Funkensturm for new configuration to take effect. Luckily with Go this takes about half a second. This has advantages (you don’t need to learn a complex config language) and disadvantages (you’ll have to learn Go syntax (your life will never be the same.)you’re millage may vary.

I’m playing with the idea of interpreted Go code (exp/eval package) to make this more dynamic, but this will not happen any time soon.

In upcoming posts I will detail some proxy configurations and show actual code.

Code works, but needs to be cleaned up. I expect this too happen in the coming days or weeks - at the most. The code is included as an example in the Go DNS package and can be compiled if you have the Go language installed. See the directory _example/funkensturm for the code and examples.

Why Funkensturm? I just wanted a cool sounding German name for this project, like Stacheldraht, but different. Thanks to Twitter and @__sporkbomb it became the name.